With 220 days of sunshine per year, almost 900 years of history, a unique heritage and a vibrant culture, to choose Portugal is to choose an exciting country, in the West Coast of Europe, to live and work.

Thanks to its privileged position, halfway between cities as distant as New York and Moscow, Portugal has an unrivalled quality of life and privileged connections to Africa and Brazil. Portuguese is the 5th most widely spoken language in the world. With a favorable economic environment, Portugal is a fiscally attractive country.

It’s nice to live in Portugal!

An unparalleled quality of live also attracts talent and investment to the West Coast of Europe. For individuals and families looking to relocate, the country offers family-friendly security. There also are top education establishments to choose from, including universities and international schools.

Here in Portugal, the sky is blue, the sunshine is fantastic and the sun sets over the sea. Living in Portugal is a very strong argument for attracting talent.

Where the talent grows

The success of a project depends on the quality of its human resources. Portugal has a highly qualified and talented workforce. It’s an innovative country with a favorable economic environment and very diverse regions. Portugal today has a strong pool of workforce with high level of education in a wide range of fields.

Moving-On Moçambique specializes in professional mobility services, advising businesses from different sectors since its foundation in 2011.
With extensive experience and profound knowledge of the local reality, we deliver services in Maputo, Xai-Xai, Inhambane, Beira, Tete, Nampula and Pemba.

A conduit to global markets

Situated in the Southeast of Africa, Mozambique shares borders with Tanzania, Zambia, Malawi, Zimbabwe, Eswatini and South Africa. Its 2,500 km of coastline are bathed by the warm waters of the Indian Ocean. With an area of 801,590 square kms, it is the 35th largest country in the world.

It is also strategically located: four of the six countries it borders are landlocked and hence dependent on Mozambique as a conduit to global markets. Mozambique’s strong ties to the region’s economic engine, South Africa, underscore the importance of its economic, political, and social development to the stability and growth of Southern Africa as a whole. 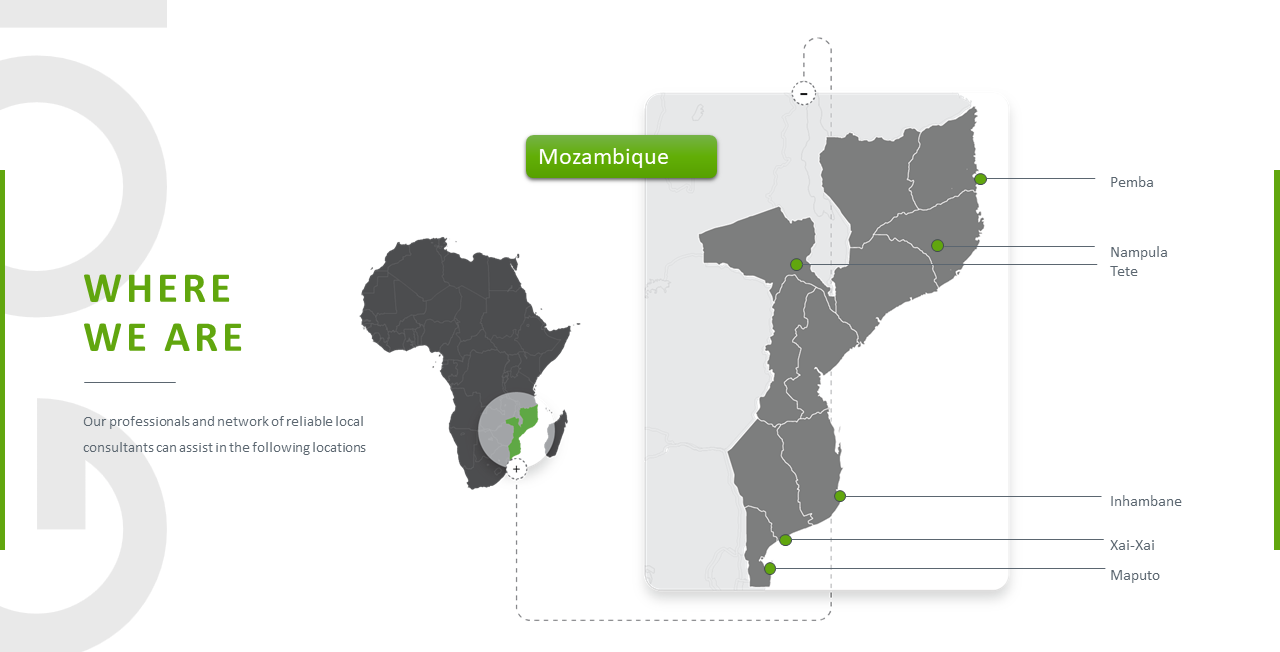 Mozambique has considerable quantities of natural resources, of which the major part is yet to be explored and developed. This situation is however rapidly changing. Since initial exploratory drilling in 2007 revealed huge volumes of natural gas offshore, it became clear that the waters of Mozambique - and especially the Rovuma Basin - contain vast reserves of high-quality natural gas, paving the way for the country to become a leading regional LNG exporter and a major global energy player and attracting the eye of the oil and gas industry. Besides natural gas, coal, mineral sands, hydropower and most likely oil, there is an enormous potential for exploration of agricultural, fisheries and forestry resources and an urgent necessity to diverse investment and development.

BOOK A FREE CONSULATION
Previous
Next
Scroll to top